Earlier in the year I was set a photographic project that challenged me to find something that I felt drawn to within a 50m proximity of my location, to photograph it for 20 minutes, then to create a piece of art from the images. Fortunately I found my subject quite quickly – it was hard to miss the bright red post box set into the wall against the grey stone and sky of a cold March morning. 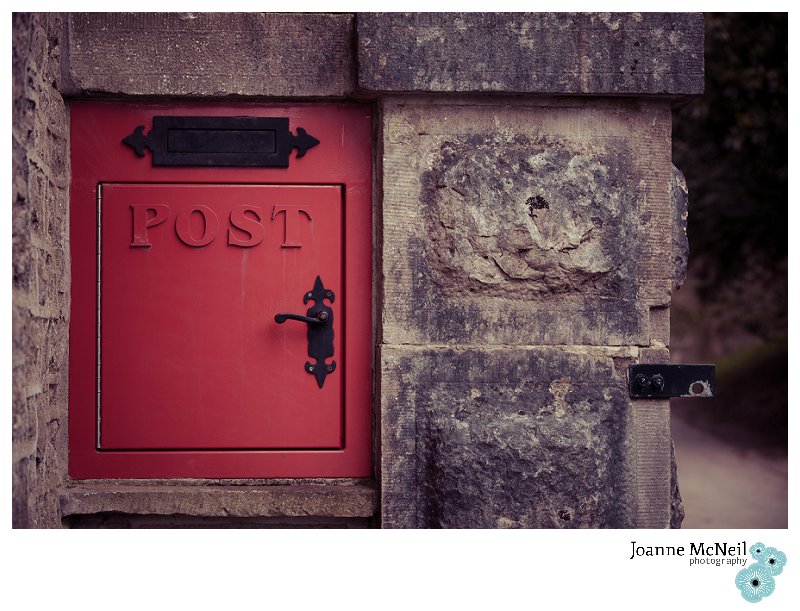 As I was photographing it, examining it from every angle possible, I became lost in its story. How long had it been there? Who had it seen pass through these gates over the years? Where was it made? Who had crafted it? How many letters had been posted in it? Who had written these letters? Were they love letters, business letters, letters conveying good or bad news? Where they bound for distance shores? Who received them?  What stories this post box and its contents could tell. And for that reason, I fell in love with it. 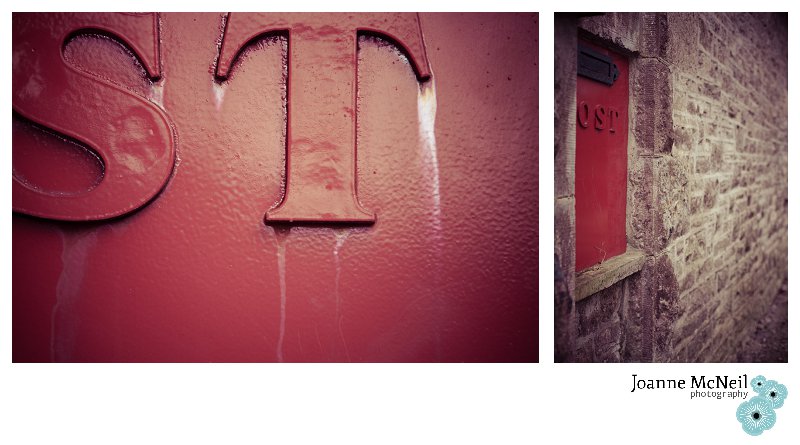 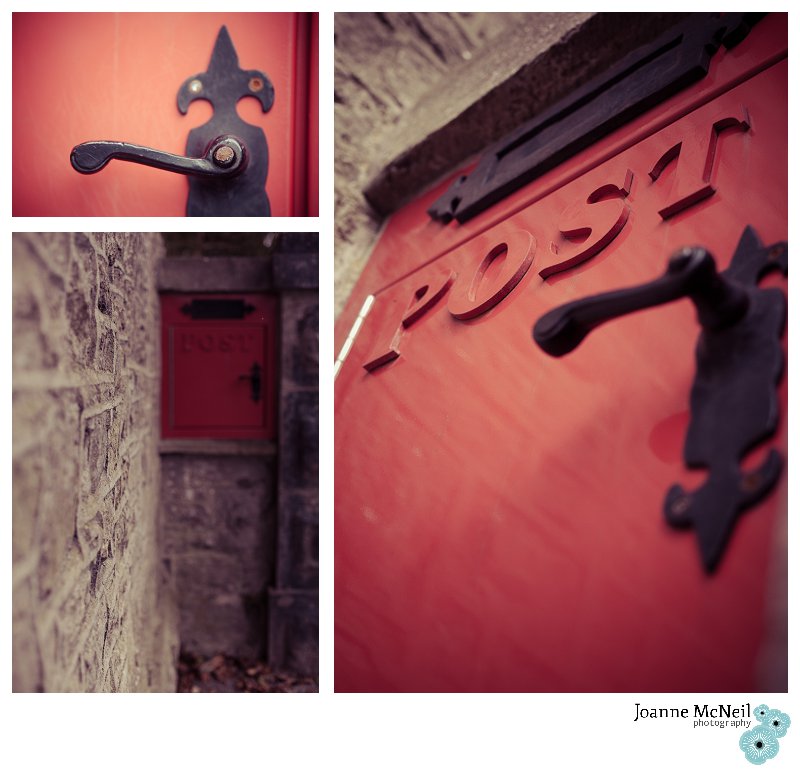 Later, I wracked my brain about what to do with the images, how could I turn them into a piece of art that I’d be proud to display? I spent days trying to come up with and quickly rejecting ideas – a collage, an actual post box made out of the images, wrapping paper. But none of these felt right. What was that post box saying to me? After a few days an idea hit me. I would reproduce the images as postcards, and the post box would represent the start of the mysterious journey that all postcards go on once they have been posted through that magic porthole until they land on somebody’s doormat.

Postcards are just darn good fun – they remind me of holidays, good times, places I’ve visited, coming up with amusing anecdotes for friends and family back home, trying to find a suitable one for Granny, borrowing pens off strangers, practicing pigeon Spanish and other languages in order to buy some stamps and hurriedly writing them at the airport or on the plane home- you can’t go away and not send a postcard! So much goes into a small piece of card measuring 6 x4 inches.

The other thing about postcards for me is that they represent a tangible, visible, tactile form of communication, particularly in this day and age when so much correspondence is done using email and text. Just like a photograph, postcards are something to hold, turn over, feel and pass to people to look at before placing somewhere on display. They can bring back memories, stir emotions and create connections. They are valuable and can become part of a collection. The kitchen wall in my husband’s grandmother’s house was a mosaic of postcards from all of the places that the family had travelled to. We would spend ages reminiscing over who had been where and when, and remembering places we had even forgotten about – all brought freshly back to mind in an instant on seeing a picture of a sunset over a beach we had walked along years before.

I’d set my heart on a revolving, vintage style postcard holder to display the postcards, and eventually found one in the US, along with a vintage-look stamp for the backs of the cards. When the postcards arrived back from the printers, I stamped the little postcard motif on the back, popped them in the carousel and gave them a twirl – voila, I had my art! The fact that I could touch the images, take them out, spin the carousel around, change the order, change the images  made me even more happy! And if I wanted to I could add or replace any of the postcards with new images, almost like having an old-style photograph album. The carousel now has some more of my favourite images in it and pride of place on my desk where I love spinning it around when I need a little break or some creative input. It’s also inspired a few ideas for some potential products for clients – all this from a humble post box hey? 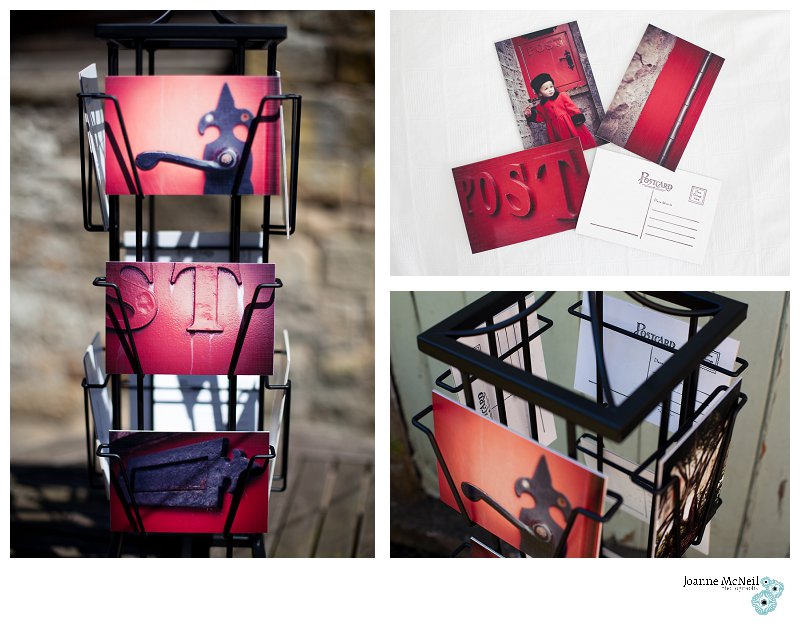 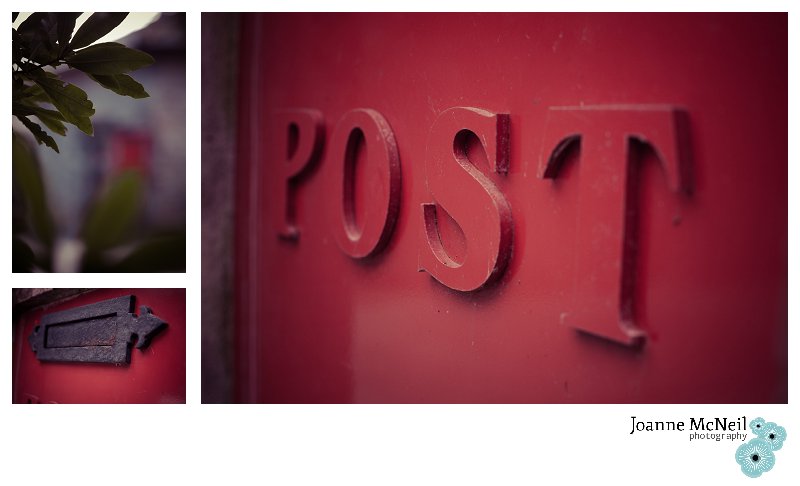